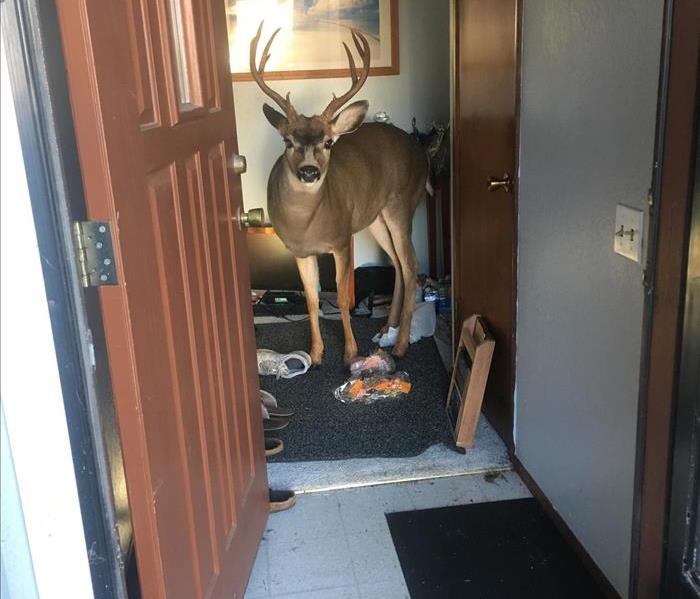 Last month, December of 2015, we received two phone calls from customers that stood out to our SERVPRO franchises. We had a residential home and an insurance agency office on the same day have a deer jump through a window.  Both of these deer proceeded to track blood all throughout the structures in their dazed state of confusion.  After being in business for over 20 years we have done many different types of blood clean ups. Deer blood is included in our variety of experience for Bio Hazard Remediation.

What Would Your Office Do?

When it came to the insurance office with the deer jumping through the front window, they knew exactly who to call. SERVPRO was out on site the same day as the loss occurred. There were a total of six areas affected when the deer finally stopped running around. Everything from the office entry way to desks, printers, floors, ceilings, filing room, bathroom, break room, hallways, and main office had to be cleaned and sanitized.

As the insurance company expected, from previous claims we had work with them on, SERVPRO had them back up and running in only 3 days. That time frame included the first day of work where we received the emergency call around 4 o’clock in the afternoon. Though the insurance agency wished they never had to go through something like this, SERVPRO made it "Like it never even happened," for them.

Is this Reality or a Murder Show?

Now the equally dramatic if not more terrify phone call about a window jumping deer was from homeowners that called us in to clean up blood. The wife walked in their home late in the evening and she immediately saw blood everywhere. Logically the homeowners called 911, thinking that someone was in their home. The police sent officers out to clear the home for entrance, only to find out there had been a deer trapped in the home.

Our on call crew got the call late at night about the Bio Hazard Clean Up and was out there that night. The deer ran through a total of six rooms in the home, leaving a trail everywhere it went. After four days of cleaning the homeowners were back in their home. The structure had been disinfected and cleaned so it was "Like it never even happened."